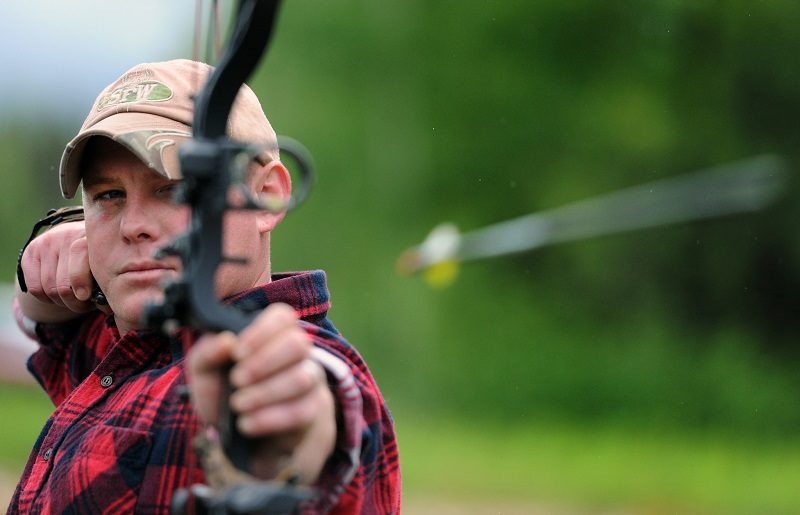 How to Defeat Target Panic in Time for Bow Season

Have you ever stared down your pin at the bullseye, only to have it constantly drift off-center? If so, I’m sorry to say you are likely suffering from a case of target panic.

If you’ve been around archery and bowhunting long enough, you’ve surely heard stories of this dreaded problem. It can happen to anyone who spends enough time shooting their bow.  Some archers have only mild difficulties, while others are stricken with a debilitating inability to hit what they are aiming for.

Target panic is similar to a golfer suffering from the yips, no longer able to sink a simple 3-foot putt, or the All-Star infielder who inexplicably can no longer accurately throw to first base. There is some mysterious link between the brain and muscle memory causing these mental misfires.

Fortunately, there are a lot of smart bow hunters out there who have figured out ways to train your way out of this predicament and regain your confidence going in to bow season.

What is it that you are struggling with when you prepare to shoot? That feeling of anxiety comes in many forms and can be surprisingly debilitating. The good news is that you can overcome these difficulties, but first, you need to understand the symptoms – freezing at the draw, fear of missing, hurrying, snap shooting, commitment trouble, aiming repeatedly.

Some of these symptoms may be from inexperience, but others can afflict even the most seasoned bow hunters. It’s a perfectly natural phenomenon that happens in all sporting activities where targeting takes place.  A hunter and his bow taking aim are not unlike the analogies I used earlier; the golfer preparing to putt or the baseball player preparing to throw a runner out.

When you draw your bow and experience fear you will miss your target, over aim, or when you seemingly freeze up and are unable to shoot are all forms of caring too much about the result. The fear of failure in the back of your mind causes you to not act.

Hurrying and snap shooting are the opposite, where instead of clamming up, you panic and a poor shot is the result. This is also fixable with practice. The rest of these steps are designed to help erase both the fear and the panic symptoms that occur in bow hunting target panic.

The first thing to do is to start fresh by going back to a low power bow, or even just a string bow. The idea is to strip away the precise aiming and gadgetry of the more complex bows, and then focus on just the basic fundamentals.

Many times as bow hunters we try to push ourselves too fast because we have unrealistic expectations of our abilities. For now, we just want to practice the draw and release, with no targets. There is no competition here, just feeling the familiarity of a bow. Stay here a few days until you feel you are ready to go forward, and then you’ll take baby steps toward your normal routines.

Increase the bow-power, but just practice shooting it. Your goal is to shoot it 100 times today. Notice there is no expectation in that goal about hitting targets. The goal is to let your body and mind re-learn what it feels like to shoot without expectation. You’re simply drawing the bow, closing your eyes, and releasing, trying to break the spell of anxiety over taking the shot.

Step 3 – Get in Close, Shoot Blind

Now we want to get in close to a target where you can’t miss it. This is not an exercise for accuracy, but in overcoming self-doubt.  Start at just three yards from the target. You’ll simply draw your arrow; take aim, close your eyes, and release.

This is a good time to take down your targets and shoot into a blank target or straw bale. There is no bullseye. There are not daunting red rings. This is just about you, your bow, and your arrow. This is not intended as a point and aim exercise. This is just about reestablishing form and building a stronger relationship with the process of shooting your bow.

Now that you can easily shoot arrows into a blank target, we want to build brain memory to draw and hold aim without the urgency to shoot. So again from a close range, you will draw, aim, hold for 2-4 seconds, and drawdown without shooting.

Draw your arrow and just hold it there. Feel what it is like to hold your drawn bow; holding that pose and slowly count to 30. This isn’t easy, and you will even perhaps feel a new strain on your core muscles. This is good as it’s training your body to more easily hold a draw.

The second goal is to learn patience. You are the master of the situation. You decide when to shoot and when to hold. The certainty of that is not about missing the target, but understanding the process. It teaches your mind and your muscles to go through a series of steps. At this step firing the arrow is not about hitting the target, but about building routine. When you master the routine, the accuracy of your shots through practice will fall into line.

The final step is to progressively increase your shooting distances while building technique, rhythm, and confidence from both near target shooting and distance target shooting. The idea is to get comfortable at one level and then to challenge yourself at the next. Move between the two until you are hitting the most distant rung on the ‘shooting ladder’.

Repeat each step at each new distance until you gain the confidence, muscle memory, and courage to own that shot. Don’t forget to revisit the shorter rungs from time to time to remember what they were like. Variety is key, and a good tip is to make a cycle through each rung as an exercise in adapting to different ranges while hunting.

How to Beat Target Panic (Video)

If you’re more of a visual learner, here is a great video about bow hunters beating target panic.

How long does it take to overcome target panic? There is no set time limit because each person is different. How long you need to train depends on the depth of your symptoms but plan on a few weeks to 2 months for the worst cases.

Summer is the perfect time to work on it and be ready for fall bow season. Follow these guidelines over the late summer, and continue to practice and follow these steps during the season. I promise if you apply dedicated effort, you can emerge from your struggles as a better bowhunter.