Gain the Edge with the Best 3D Leafy Camo for Hunting

The purpose of camouflage is to break up the silhouette of a hunter in the woods. While camo patterns break down the of the solid blocks of color, there remains the solid outline of a hunter’s body. 3D leafy camo suits aim to solve that problem and give you another slight edge over wild game.

Most wild game are blind to color, including whitetail, turkey, and elk. Their vision is tuned for spotting outlines of threats, this includes regular camoufalge and blaze orange. The 3D effect of leafy camo adds depth, making it even more difficult to be spotted. The rest of this article reviews what to look for in a 3D camo suit, and gives our top recommendations.

Before You Buy: 3D Camo Considerations

3D camo is not terribly expensive, but as with all gear, mileage may vary depending on the quality of the suit. Consider these points below to ensure you buy the best 3D leafy camo for your style of hunting.

Now that we know what to look for in a camo suit, and what the prices ranges are, it will be useful to review some top recommended 3D camo in more depth. See what camo patterns are available, and which features we like best.

See3D is the first company to produce a leafy camo suit in a blaze orange pattern. The company founders, a father and son duo in Vermont, saw a gap in the market when they went looking for safer 3D camo clothing. Not finding anything, they took the initiative and invented their own. The result is the See3D Blaze Orange 3D camo suit.

The suit is a lightweight jacket and pants set that can be worn over your hunting clothes.  The main layer is a NoSeeUm mesh, with polyester leaves. The base color is blaze orange, with the proven TrueTimber MC2 Blaze Orange pattern. The cut of the leaves is very nice, with a pointier cut to the leaf edges that is very realistic.

If you take your safety seriously, the concept behind See3D makes a lot of sense. Not only do you gain the benefit of depth and outline break up to conceal yourself from wildlife, but you now will be seen by other hunters. Combining the latest in leafy camo and the safety of blaze orange is a win-win scenario. 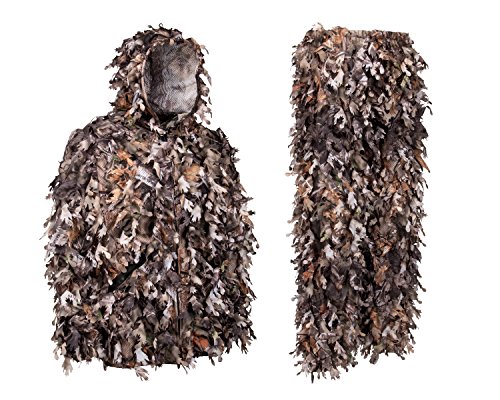 The North Mountain Gear 3D camo set is made of breathable fleece as a soft shell. It’s best used in the cooler weather of fall and spring, so keep that in mind if you are in warm weather regions. The jacket has two very large hand pockets with zippers and elastic closures. The pants also have two big pockets with zippers, and knee-high zippers for easy on off in the tree stand. While over-sized to begin with, the pants run big, and the jackets are true to size. While there is not as much leaf coverage as we’d like to see, the shell being camo patterned makes up for it.

Cabela’s patented Ghil-leaf camo technology has made this realistic 3D camo set into a best seller. The leaf cover is cut to an exact outline of real maple leaves. The cool part is how they built it with a microfleece liner on all leaves for improved silent movement. The time proven Zonz Woodlands pattern, and the suit materials only get softer with washings.

The jacket has four pockets, including two large cargos on the outside, and two for hand warming. The hood has a draw cord, and can even roll up into the collar so it can’t catch on branches or brush. The pants are equally useful, thanks to two large cargo side pockets and zippered hand pockets. You must buy the jacket and pants separately, and the set is pricey, but is the best camo hunting suit for the money in our book.

For a less costly alternative to the Ghil-leaf camo, look no further than the Leafy-wear Pro II. Long a top seller at Cabela’s, the Leafy-wear Pro II has gone through continuous improvements. Made from 4.5 ounce mesh, the suit shell is now suitable for even the warmest fall hunts. The jacket has a full sized, draw string hood and even has a camo facemask that stuffs into one of the two cargo pockets. What sets this suit apart from others is the silent leaf materials. The camo use longer leaf shaped strips of fabric to give it depth, rather than individual leaf cutouts. With use the leaves really achieve a worn in 3D effect appearance.

The TrueTimber Leafy Suit might be the best cheap camo suit for hunting this year. The price is very attractive for a jacket, pants, and boonie set. This camo suit has a similar look to the Leafy-wear Pro II but with a shade darker drowns and greens. The included face mask and the MR III insect repellent built into the fabric are the two features that might make this suit a great buy.

10 Best Hunting Chairs for the Blind or Tree Stand

7 Best Turkey Broadheads to Get Your Gobbler

Sound Off with the 10 Best Turkey Mouth Calls

Gain the Edge with the Best 3D Leafy Camo for Hunting