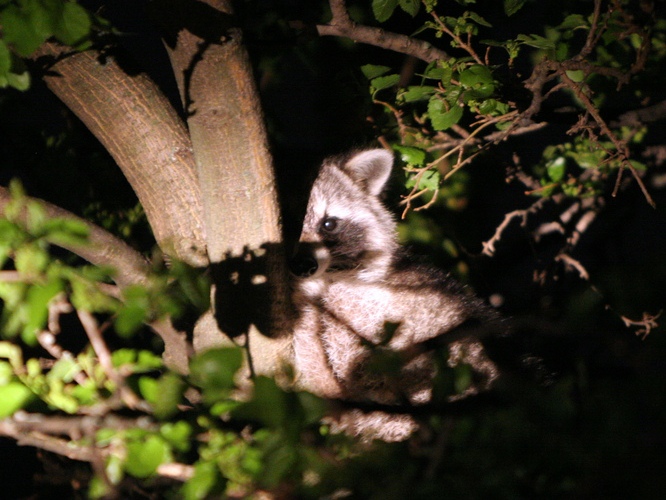 If you’re planning on hunting for raccoon at night, it is essential that you have a few good coon hunting lights. You’ll be doing a lot of walking through the woods carrying guns, a pack, and leading dogs if you use them.

It’s imperative for your safety to have a hands free light source, as well as one spotlight to take accurate shots in the dark. In this guide, we’ll show you some of the top raccoon hunting lights so you can choose one that best fits your style of hunting.

There are a few different types of lights used for coon hunting. Each one has its strengths and specific purpose. You may only need 1 type of light, or you may like to have 3. It really depends on how you like to hunt and what lights will meet your requirements.

These lights are specifically designed to be mounted to the scopes of your rifles. Some are shaped like compact flashlights with adapter brackets, while some have integrated mounts on the light’s body. Gun mounted coon hunting lights come in different colors, typically red, green, and yellow. Other common features are beam width and elevation adjustments, and on/off pressure switches.

LED Headlamps are a must if you will be walking long distances through the woods on your coon hunts. It’s important to have your hands free to carry your equipment, lead your dog, use your electronic raccoon call, and to avoid injury from tripping over brush.

A high powered spotlight is needed to spot elusive coons in the treetops and in thick brush. Spotlights can be carried in your pack, on your belt, on your ATV, or in your truck. Some handheld spotlights have long-life battery packs, while some do not and are best used with the cigarette adapter in your vehicle.

The table above represents the top rated hunting lights for each category. Now I’d like to get into more depth on my favorite lights within each category. 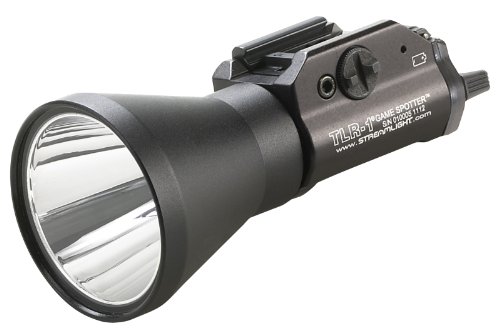 The Streamlight Game Spotter is without question my top choice for night hunting lights.  It puts out a high powered 150 lumen/31,000 candela beam, thanks to a parabolic reflector and Green C4 LED.

The green light helps you maintain your night vision, while not alerting raccoon, fox, coyotes, and other varmints. The TRL-1 is easy to attach to various rails on different guns, usually taking only one hand to snap on and mount.

The Game Spotter light is operated on two 3V CR123A lithium batteries, which are included in the kit.  This light is also rugged enough to take the abuse of night hunting, thanks to its waterproof design, and temperature resistant housing (-40 to +120 F). 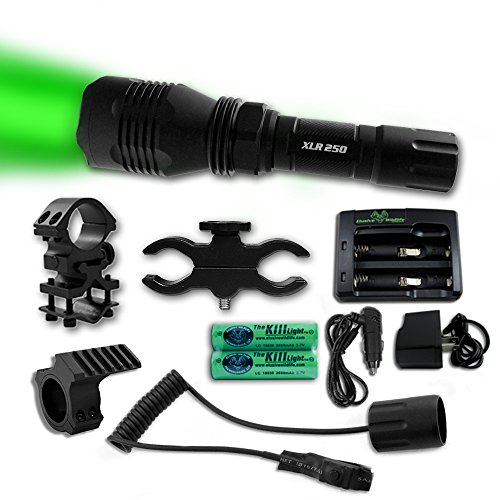 The Kill Light is a rugged LED tactical rifle light manufactured by Elusive Wildlife Technologies. The XLR250 is a scope light that can also be used as a flashlight, with it’s rear cap push button.

You can attach the light on your rail mount, forearm, or directly on the barrel with the two included mounting brackets.

The Kill Light more than lives up to its advertised range of 250 yards. The light is extremely bright and with the use of a scope you will easily be able to identify targets well past 200 yards. Some customers have even reported achieving ranges up to 300 yards.

The XLR250 comes standard with a rechargeable lithium battery pack and charger. You can expect the battery pack to consistently last you an entire nights hunt. Keep in mind that lithium batteries take longer to charge, and this light will take 5-6 hours to fully recharge.

The price may be steep for some hunters, but trust us when we say you’re paying for quality. Hundreds of hunters are happy to say the Kill Light XLR250 is the best night hunting light they have ever owned. The green version is most popular with night hunters, but there is also a red light available should you want one. 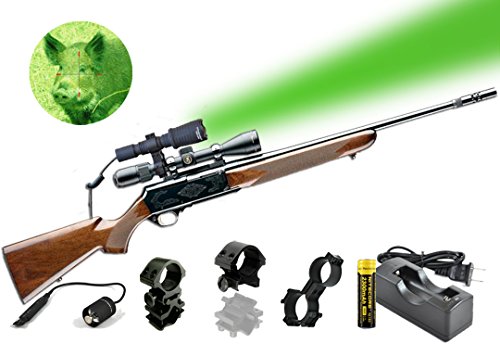 The Orion H30 is a lower cost alternative to the Kill Light. Just like that top rated scope light, this baby will easily light up your targets up to 270 yards with the powerful 300 lumen Cree XP-E2 LED light source.

While it has great performance, it may not be quite as rugged as the XLR250. Hundreds of hunters love this light, but occasionally a report of broken lenses or bulbs has occurred in the field.

Just like the XLR, you get a scope mounting bracket, a momentary on/off switch attachment, and a rechargeable battery pack. The battery pack can run for 90 minutes continuously and will last an entire night if you use the on/off switch capability.

If you cannot afford the higher end Kill Light, the Orion H30 is a worthy alternative. This light will get the job done and will definitely help you have more successful coon hunts. 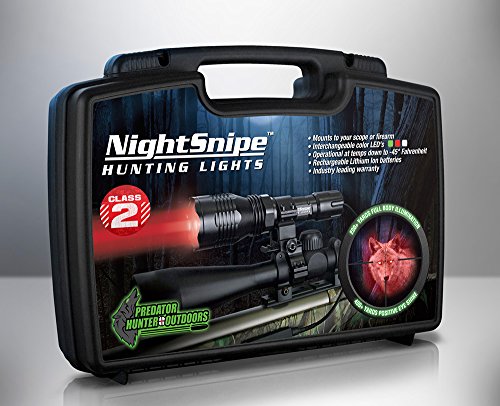 The Predator brand is very popular with varmint hunters. A good buddy of mine has the Night Sniper Tactical Kit, and its easy to see why guys like it so much. It is built from a rugged aircraft aluminum and ultra bright CREE LEDs.

The whole kit comes in a nice plastic case which is good because you get all the mounting hardware, red and green LED attachments, rechargeable battery pack, and a push button on/off switch. The range is excellent, easily 250 yards when I tried it.

Varmint makes a heck of a scope kit as well, and it comes at a lower price. Just like the Predator, its made from Aluminum and CREE LEDs. The battery life on a Varmint is around 3-4 hours for the green light and 2-3 for the red. Click Here to Check out Varmint.

The Gonex 80k Lux is one impressive LED hunting headlamp. The 10 watt Cree XML LED’s output a spotlight up to 300 yards.

Combine that with the long battery life from the lithium-ion battery pack, and you’re looking at one terrific workhorse coon hunting light.

The Gonex headlamp comes standard with 2 battery chargers. One for standard AC wall outlets, and one for the power outlet in your vehicles. Also standard is a screw on, red optical lens that comes in handy to not spook animals on night hunts.

My coon hunter friends love this light for it’s brightness, variable power settings, and the lightweight battery pack that can attach to your your hat or onto your belt loop.

A good spotlight powerful enough for night hunting will cost you a bit more than the cheap models in most sporting goods stores. The Streamlight Waypoint and Lightforce 240 Blitz are two great light options for coon hunters, and they both cost around $120.

The Streamlight runs on a rechargeable internal battery pack and only weighs only 1 pound. You can shine trees for coons for hours and not get tired arms. The Blitz is a plugin only model, perfect for using on your ATV while spotting trees, and weighs in at 2 pounds.

Ask anyone who owns the Browning spotlight, and they will rave about how bright the light is, and how dependable it has been for them. The reliability, fast recharging, and powerful Nichia LEDs has earned the Cyclops plenty of fans as well. In the end, I prefer the Streamlight because of its light weight, cordless operation, and rechargeable batteries.

In the video below, Keith Warren gives us a short but instructive tutorial on how to use scope mounted lights for coon hunting. He had been having trouble with his deer feeders, and using a trail cam, he discovered that they had a pretty bad raccoon infestation.

Warren prefers a Laser Genetics ND3 SubZero Laser, which you’ll see in the video. It has a powerful beam, with adjustable width, making it ideal for taking shots a treed coons.

As always; Please make sure you know the local hunting regulations, and that you have permission from landowners.

A common question among coon hunters is which color LED hunting light works best? There is no definitive answer, and each color has it’s own pros and cons.  You might want to ask your fellow club members what style lights they choose, and why.

Red light from LED’s puts the least amount of strain on the human eye, allowing you to hunt longer at night. Your natural night vision will also be least affected by a red filtered hunting light. Many raccoon, hog, and coyote hunters swear by red hunting lights for this reason.

Red light also tends to have the least detrimental effect on animals. Red does not usually spook an animal, and in fact, can be a calming and attractive influence on them.

Green LED lights can be seen for longer distances, especially under a rifle scope. The human eye can also discern more detail and contrast with a green light. That is one reason you will see night vision systems use green filtered light.

A green light may spook some types of wildlife more than others. Deer, for example, are known to spook easily at the sight of green light, but coyote, pigs, and raccoon are not.

The best practice with LED hunting lights, Red or Green, is to turn them on just before lowering your rifle to take aim. This will give you the best chance at not spooking the animal, and taking a quality shot.